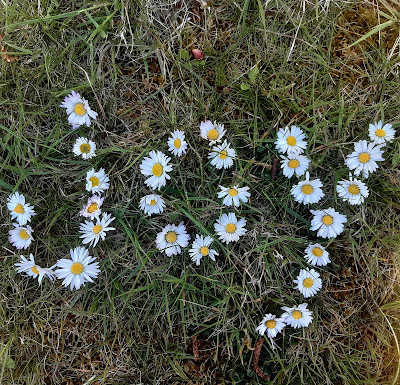 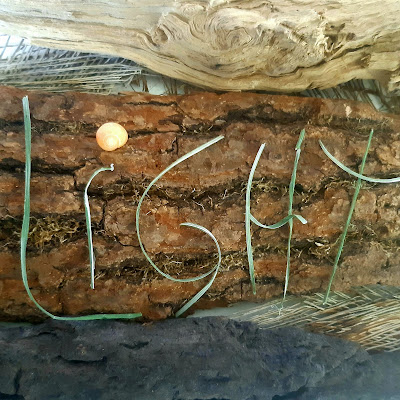 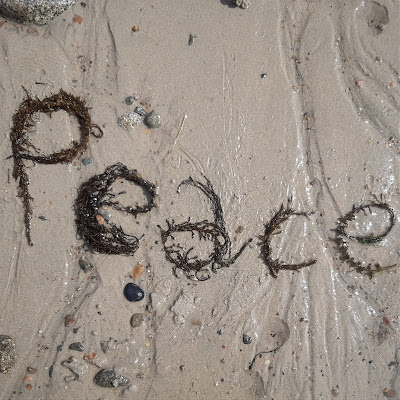 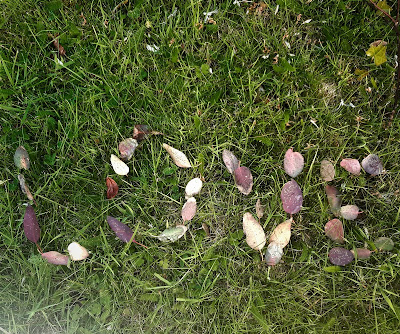 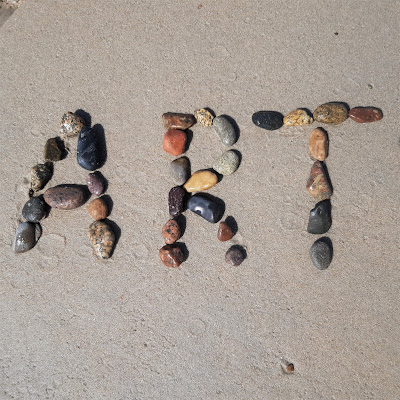 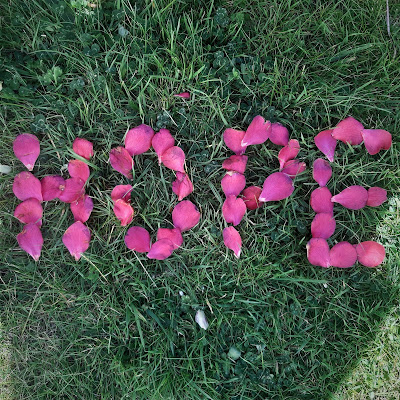 Posted by Patricia at 5:07 AM No comments: 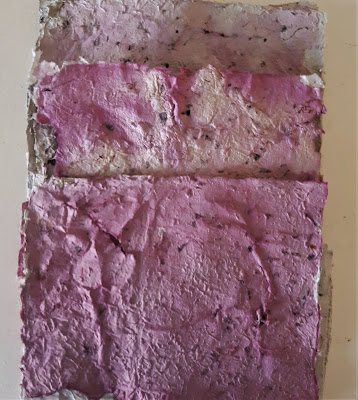 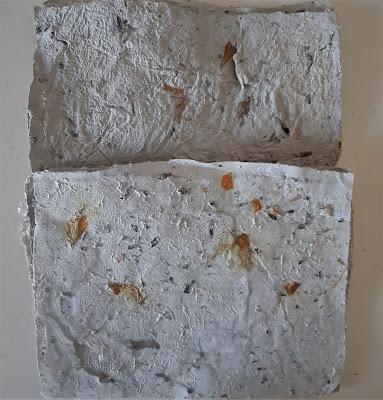 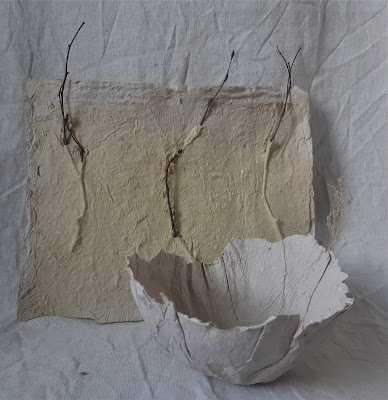 #handmadepaper #recyclepaper #ecodyeing #recycledpaper #bowls
Thanks for visiting!
Posted by Patricia at 6:31 AM No comments:

A traditional quilt pattern: Star of Bethlehem, I made this quilt for two friends. Pieced and quilted by hand, all fabrics are from my stash. It makes 96cm x 96cm, and my friends received  their gift a few days ago. 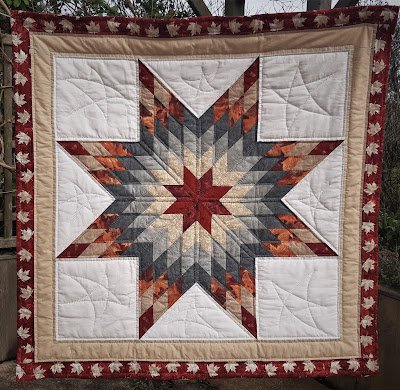 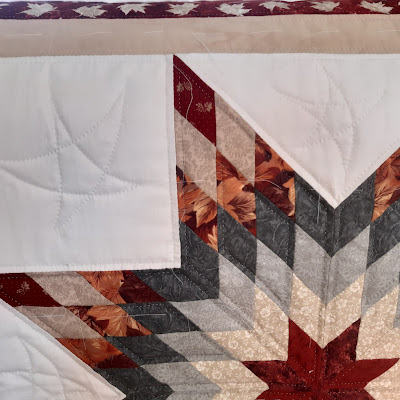 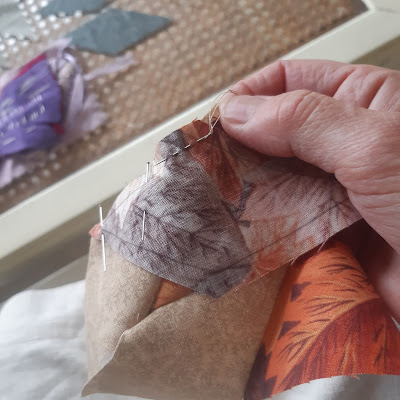 Posted by Patricia at 4:33 AM No comments:

I participate in the #52tagshannemade (with Anne Brooke, https://www.annebrooke.co.uk/)

I made a Pacific island view from the sky. Cotton, gauze, tiny shell, French knot. 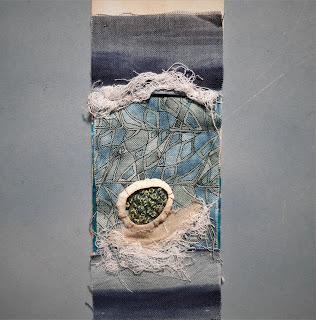 Posted by Patricia at 1:59 AM No comments:

I participate in the #52tagshannemade (with Anne Brooke, https://www.annebrooke.co.uk/)

For the 14th week, the theme was: Pocket, favorite place, and treasures. I chose Quebec, Canada.

A few years ago we went for a one-month trip backpacking with my husband. We didn't have too much space to bring "treasures" other than great memories and digital pictures.  It's a beautiful country and we met lovely people.

We hope we'll go again to discover other regions. 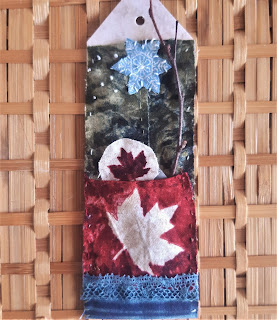 This tag gave me another idea, to make a handmade book about the different places where I have been or lived, that marked an important time in my life. I have already lived in about 32 places without counting house-sitting while traveling.

Posted by Patricia at 4:15 AM No comments:

Sun Salutation, also known as Surya Namaskara, is a traditional yoga practice. It is a sequence of 12 postures or asanas linked together to form a flow, that aims to awaken the body physically, mentally, and energetically. Breathing is an important aspect of the Sun Salutation. Traditionally, it's practiced at sunrise.

For the challenge #Areyoubookenough for April, the theme was: Body Language.

When I read the title, immediately I had the idea: a concertina book, with pop-up figures doing the Asanas.

I finished the little book with Mantras in Sanskrit and English. Painted with watercolor and acrylics. 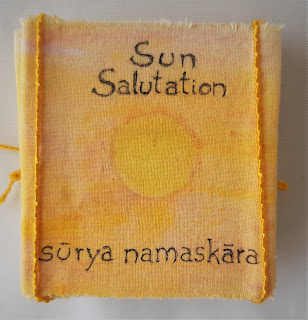 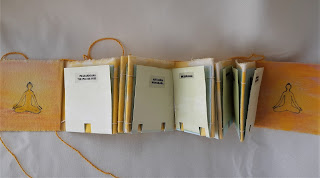 During the video, a Yoga teacher sings the mantras. If you want to listen to the whole series, here is the link. 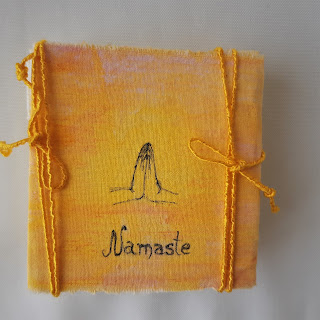 Posted by Patricia at 1:57 AM No comments:

Sarah turns in circles, something is missing in her hands. The scissors, the gloves for the garden, the thin cordage to secure the small twigs that begin to fall...everything is there. However, she feels something is missing.
Time has passed, it is true. The children are no longer there to play around the blue clusters. They are no longer there to make their laughter heard and turn around the wisteria, which was hardly bigger than them. She looks up, the wisteria continues to grow, but the children are gone.

It is always a pleasure to let herself go into the blue-mauve dreams, invaded by the sweet scent and tenderness of the flowering branches. It's so beautiful to dream, Sarah repeats to herself in silence, so her neighbors will not think she's speaking alone.

Emily, my little romantic who always asked to stay a little later on the terrace to see the sun mixing his yellow lights with the violets of the wisteria. Violet and yellow, complementary colors, they go well together...sometimes.

Amanda, you used to pick up the fallen flowers to make mandalas on the lawn, knowing that the April wind would take care of changing everything a few minutes later. My dear, you knew already that everything changes all the time.

Matthew, you just wanted the wisteria to be a little bigger, a little stronger to have the right to climb on it. Now that it's big enough, you're gone. And Emma, all she wanted was to sleep in the wisteria's room and leave the window open to 'scent her dreams,' as she used to say. What are your dreams today, little Emma?

The wisteria's room was not the biggest in the house, but it was probably the most welcoming. A canopy bed, the old grandma's dresser, and an armchair next to the window, just in the right place to look at the wisteria and the children grow up.

Sitting in her armchair, Sarah had the perfect light to create her quilts; they would be Christmas presents for each one of the kids.

Time flies, it's true. The kids don't come often, but the wisteria is there waiting for them, like Sarah and her quilts. Oh, my dears, I miss you.

Patricia
I'm a visual and textile artist, potter and art teacher for more than 25 years, I'm deeply inspired by nature, particularly flowers, trees, skies, the ocean and nature's texture. Painting and photographing nature give me the opportunity to relate to the outer world, as my goal is being more conscious and present every day to Nature's Beauty and Harmony to being able to translate it into my artwork. Being an artist, and it doesn't matter in which discipline, is a state of mind which tries to improve and to embellish the everyday life, to bring up the soul and move it closer to the Beauty, to the Light and to the inner and outer Harmony. It's also a possibility to wake up and reveal feelings which uplift the spirit of the observer. Writing and reading have been always part of my life.